Thibaut, who came in Class40 in 2013 with Victorien Erussard, often ended on the podium. 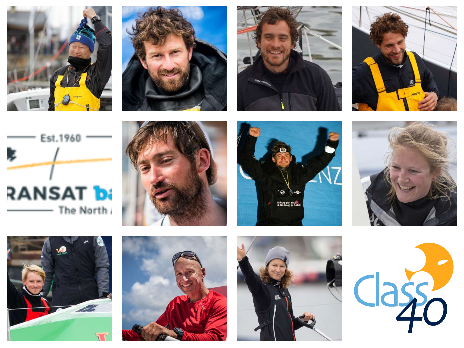 But 10 boats lined up for the start of The Transat Bakerly. 10 skippers and 10 different types of projects, with a different personality and a different story.

Louis Duc (Carac) finished second of this transat, considered to be the most difficult, due to its Northern route. In 2013, he arrived third of the Transat Jacques Vabre with Christophe Lebas on the same boat, a 2008 Lombart design boat. This time, his large experience in offshore racing led him to choose a southern route because he knew that his « old » boat couldn’t be very fast reaching compared with new generation boats. Strategy that allows him to stand on the podium.

Phil Sharp (Imerys) winner of the 2006 Route du Rhum in Class40, bought #130 (ex GDF SUEZ, ex Zetra) in April, just in time to be qualified. From the opening miles, Phil took the lead of the race  several times and despite many technical problems (such as mainsail tearing) he climbed on the third step of the podium.

Edouard Golbery (Région Normandie) and Robin Marais (Esprit Scout) participated in their first transat in Class40, after participating in the Mini Transat. They lined up for the start thanks to their families and friends. A limited budget but a real competitiveness. They fought to the end and finished just 1h30 from each other after 19 days racing.

The German woman Anna-Maria Renken (Nivea) arrived on the 6th position. She is the first woman to finish that very difficult race. It was also her first solo transat and she was preparing for months. She arrived after many technical problems but also medical problems and she was very proud and very happy to complete the race.

Hiroshi Kitada ended 7thof The Transat. Communicate with him was not easy because he is Japanese and speak only a few work of English. He came to the Dinner Gala in traditional Japanese costume and impressed eveybody. The Transat was his first solo race in Class40 and it was also the first race for his new boat. He was very proud to finish this race especially when he realized that it was one of the most difficult of the Class40 program. Everyone (organization, competitors, classes…) hopes that they will meet again on other events.

If only 7 arrived in New York, 10 took the departure in Plymouth. The 3 who did not finish must no be forgotten.

Isabelle Joschke, newcoming on the Class40 circuit, on Generali-Horizon Mixité took the lead of the race for several days. Unfortunately, the weather conditions weakened the boat and Isabelle had to stop in Saint-Pierre-et-Miquelon.

Armel Tripon (Black Pepper / les Ptits doudous par Moulin Roty), for his comeback in Class40, chose very soon a Southern route. Unfortunalety many technical problems forced him to make a stopover in Horta and finally to give up.

Maxime Sorel (V and B) gave himself a real scare when he collided with a cargo ship near Penmarc’h the day after the departure. He decided to realize an expertise of the boat in La Trinité sur Mer to make sure no damage would compromise the rest of the season.

Anyway, The Transat bakerly is not the only Class40 race ! Since the beginning of the year, many skippers demonstrate that  there is a place in Class40 for all profiles, all budgets, in France, Great Britain, USA or Carribbean.