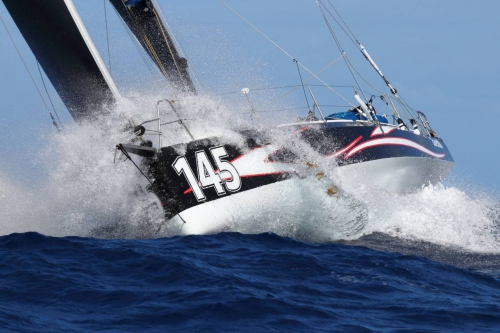 "It's really fantastic for the Eärendil team to win the European Trophy this year, after winning the American Trophy in 2018 and 2019. It's the result of a lot of investment and effort from the team and it paid off. This is a collective victory, especially that of Pietro (Luciani) who has invested heavily in the project for 2 years and at the same time improved the technical qualities of the boat, making the Mach 3 from 2015 very fast, and improvements in performance and navigation, but also that of Pablo (Santurde del Arco) and other excellent team-mates. I thank them and dedicate this victory to them.’’ Said Catherine Pourre the skipper and owner of Eärendil.

Back in Europe in April with the Défi Atlantique, the first edition of which took place in March 2019, Eärendil followed with the Normandy Channel Race, for which the Spaniard Pablo Santurde del Arco replaced Catherine Pourre alongside Pietro Luciani. Although head of the majority of the course, the black boat eventually finished in second place behind the duo from La Rochelle, Aïna Enfance & Avenir (Aymeric Chappelier and Pierre Brasseur), Beijaflore signing a nice 4th place in the event. Les Sables Horta, a superb double-handed race from Les Sables d'Olonne to the Azores in two round-trip stages, will then face the duos without mercy with a tie in points between Eärendil (Catherine Pourre - Pietro Luciani) and Beijaflore (William Mathelin-Moreau – Amaury François and Marc Guillemot) respectively 4th and 3rd of the first stage and 2nd and 3rd on the return leg, Aïna (Aymeric Chappellier - Rodrigue Cabaz) ending at the top of the test. Volvo (Jonas Gerkhens - Benoit Hantzberg - Sophie Faguet), masterful winner of the first stage, finishing fourth overall. And while at the end of Les Sables-Horta, William Mathelin-Moreaux and his Beijaflore (# 154) are at the top of this trophy, thanks to his participation in the Grand Prix Guyader, it will be the Rolex Fastnet Race which will arbitrate. Beijaflore finishes in second place right in front of Eärendil, which finally, thanks to his good regularity of their four best races, picked up the European Trophy. Beijaflore finishes second in front of the mixed duo Charles-Louis Mourruau and Estelle Greck on Colombre XL (# 101), third in the European Class 40 Trophy 2019. Colombre XL has made a very remarkable season on their excellent but not very young Pogo S2 from 2011.

We would also like to take note the very performance of Grizzly Barber Shop Cedric Kervanoel, 6th in the European Trophy and first vintage for the second consecutive year.

See you on October 27 for the start of the Transat Jacques Vabre! There will be 27 Class 40’s lining up on the start line. This year is a record for a year after the Route du Rhum, which shows the good health of the Class40. At the end of this Transat Jacques Vabre, the champion Class 40 2019 trophy will be revealed.