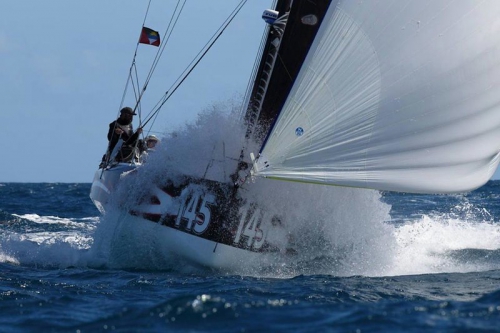 Catherine Pourre (Eärendil # 145) and her crew have already won the American Trophy in 2018, the crew of Eärendil repeated the feat this year with a beautiful first place on the RORC Caribbean 600 2019, thus keeping their title obtained in 2018 on this race and the Class40 record for the event!

If only two events attracted the Atlantic Class40’s this year, it was two great races!

Antigua has traditionally started the season with the RORC Caribbean 600. With ten Class 40’s at the start, including the participation of boats that participated for the first time in 2018 and remaining in the West Indies, a trio led the race to the forefront in an intense battle from beginning to the end of this 600-mile course between the Caribbean islands of Saint Martin and Guadeloupe. Catherine Pourre and her crew, who were the same as in 2018 Pietro Luciani, Pablo Santurde, Carlos Ruygomez and newcomer in 2019 Massimo Juris, finally emerged with a victory, just three minutes ahead of Aïna Childhood and Avenir (# 151) led by Aymeric Chappellier, he himself arrived two minutes before his pursuer, Lamotte-Module Creation (# 153) of Luke Berry.

The second race was between Newport and Bermuda, the Bermuda 1-2. A superb single-handed event for the 600-mile first leg and double for the return, as the American Jonathan Green (Privateer # 102) won the event in the combined time of the 2 heats in front of 4 of his compatriots, including a particular Micheal Hennessy, winner of the Route du Rhum destination Guadeloupe in the Vintage category in 2018, in his famous Dragon (# 54), arrived first in the round to go solo and2nd on the event in general.

Eärendil won the American Trophy, ahead of Privateer, second in the Trophy tied with Eärendil, Aîna by Aymeric Chappelier completing the podium.

The American Trophy 2019 will have had 15 Class 40’s, including 8 French, 5 Americans, 1 German and 1 English boat. Traditionally less well-endowed in odd-numbered events, the American Trophy will have seen its participation almost stable compared to 2018 with a nice plateau in significant increase on the RORC Caribbean 600 and several new American projects in Bermuda one-two.

Traditionally more active in even years, the American Trophy 2020 will see the Class 40 compete on the RORC Caribbean 600 as every year, the Atlantic Cup, doubles race, from Charleston (South Carolina) to Portland (Maine) via New York in June. This emblematic event of the American Trophy will be ideally placed in 2020 between The Transat,  solo from East to West arriving in Charleston (Departure May 10) and the now legendary Quebec Saint Malo (Departure scheduled July 12, 2020). Let's bet that this should boost the participation of Europeans in the American Trophy next year.

A tip of the hat to Catherine for once again seizing the American trophy.  A well-earned victory!  We enjoy hosting Earendil in North American waters and her level of competition helps set a standard for the fleet.

2020 should see great racing in North America as the Class 40 fleet circles the Atlantic.  First The Transat, then the Atlantic Cup, followed by the Quebec Saint Malo.