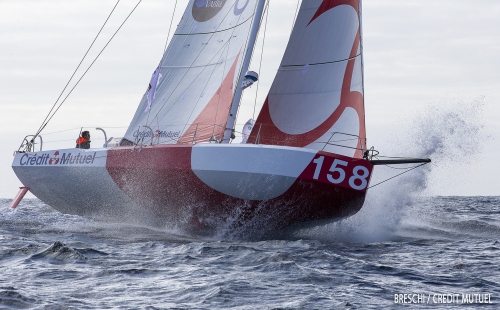 Ian Lipinski  and  Adrien Hardy are really impressive on the Transat Jacques Vabre !

The Crédit Mutuel duet  is now at the head of the fleet and they also broke the record of the distance sailed in 24 hours in Class40 !

The previous record had been held  by V and B, skipped by Maxime Sorel and Antoine Carpentier since November 2017 the 10th. They covered  377.7 nm at the average speed of 15.7 knots during the 2017 Transat jacques Vabre.

This new Max40 launched few monthes ago proves, with this new record, that the new generation Class40s are very close to the old generation Imocas (2007) regarding the perfomances !