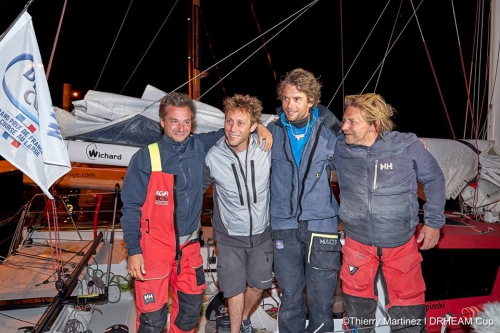 A return to the competition, and the Class40s did not disappoint – a race full of suspense! At the head of the fleet, an intense duel was played out in the Irish Sea by Crédit Mutuel (Ian Lipinski) and Palanad 3 (Nicolas Groleau). Afterwards a significant gap became apparent between these two Class40s and finally, it was the Reason design which took home the prize. Ian Lipinski and his crew (Gwenolé Gahinet, Sébastien Picault and Ambrogio Beccaria) crossed the finish line, just off the coast of La Trinité sur Mer, at 11:30pm this Tuesday 21st July 44 minutes and 36 seconds ahead of Mach 40.40 Palanad 3 skippered by Nicolas Groleau, Sam Manuard, Alan Pennaneac'h and Ludovic Aglaor.

Followed by a trio made up of Lamotte Module Création (Luke Berry), Everial (Stan Thuret) and Virgin Media Business that pursued them. The first two finally managed to beat the English Class40 and it was Luke Berry with his crew who completed the podium after crossing the finish line around 2am, just a few minutes ahead of Everial.

Ian Lipinski: “We have fun all the time at sea, but it's always nice to win after a great battle. It was excellent to win after so many twists and turns. It was not easy; I slept little, but we got along well and had a lot of fun. It was overall extremely rewarding. In terms of learning, we have had our fill since the length of error is infinite. We will never reproduce the same win, but we are able to adapt and find variations. This is an experience that will be used later!”

Luke Berry: "We fell again into light airs close to Penmarch. Our 4 small miles advance on Stan, Bilou and Lionel (Everial) turned into 4 miles behind. It was extremely hard on the nerves, but we fought to the end to regain the distance and finish a few seconds in front of them! Stress until the end, but we are happy to finish 3rd. The 1st boats escaped us during the different weather systems so we could not really fight them. Overall, we are incredibly happy; an incredibly good regatta, a good recovery because we must not forget that we have not really raced since the Transat Jacques Vabre. And it feels good! Thank you to Fred Denis and Jb Daramy with whom the racing is always at the top!”