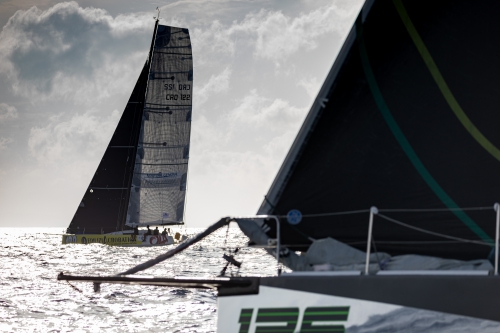 For the past few months, Class40 has been working on its involvement in the Mediterranean at the request of its Italian, Spanish and Croatian members… and its French ones too. In addition to the existing annual overall Championship Trophy, the European Trophy and the American Trophy, Class40 is now launching the Mediterranean Trophy, the first edition of which will take place in 2022.

Encouraged by its “Southern” members keen to coordinate their schedules to compete in the same races, the class also had the opportunity to create a new event, the Round Italy (Genoa – Trieste).

With the full backing of Class40, vice-president Pietro Luciani took on the task of bringing 2nd and 3rd generation Italian Class40s that had been racing on handicap for years back into the fold. In collaboration with the Yacht Club Italiano and the Societa Velica Barcola e Grigano, a measurement session was therefore organised, allowing for a trial run of this new race to take place in September, with victory going to Karnak, skippered by Stefano Raspadori.

The Round Italy race is a key event for this new Trophy, being a long-distance, short-handed offshore race, and truly representative of what Class40 racing is all about.

The Mediterranean, perfect for Class40s

Racing in the Mediterranean can be particularly challenging with its often-fickle winds. Unlike certain Atlantic races where it is difficult to keep up with the scows, the Mediterranean makes for a highly tactical playground where boats of all generations can realistically compete against each other and aim for victory. It would not be that surprising to see older boats at the top of the podium…

Key to success will be reuniting the fleets. The Italians were mostly racing in Italian races, the French in French races, the Spanish in Spanish races… which meant that there were a few Class40s competing in a number of races, but mostly under IRC or HN, which is rarely to their advantage rating-wise. One of the principal goals of this new Trophy is to bring these boats together, attract other boats and create competition in this new playground for the class. And the end goal is not necessarily to have this new fleet come and race in the autumn transatlantic events, but more to provide a selection of races in the area on which each team can base their race programme.

The end of a vicious circle

The dilemma is the same for all offshore racing classes. If there are no races, there are no boats, and if there are no boats… there are no races. A frustrating situation for boats based in the South, as well as for other boats wanting to go further afield but put off by a lack of events. Something had to be done to try and get out of this predicament. We hope that the Mediterranean Trophy will do just that by bringing together old and new Class40s with professional and Corinthian sailors alike. This new Trophy will be interesting from all perspectives.

Pietro Luciani: “The Med is a challenging sea. The weather is less predictable than out on the open ocean and it’s rare to keep the same sail up for more than a couple of hours. But nonetheless Societa Velica Barcola e Grigano and Yacht Club Italiano, with the support of Class40, were able to organise the first edition of the longest race in the Med, the Round Italy, and it proved to be perfect for our boats. I can’t wait to see how many boats will compete for the Med Trophy next year, and I’m confident it’s going to be a success!”

Kito de Pavant: “The Class40 class is thriving. These boats are grabbing the attention of more and more people all over the world. The Mediterranean is no exception. I meet a lot of sailors thrilled to come and race on these fantastic boats and race organisers who would be delighted to welcome them. But until now, what was missing was a proper race circuit in the Med to encourage people to buy boats, because the current race programme doesn’t really suit our boats. 2022 is the time to organise ourselves and bring together the “Italian” and “French” fleets without forgetting the Spanish and others who look longingly at our boats.”