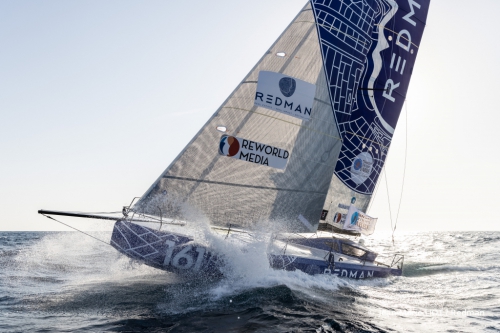 Antoine Carpentier (46), a native of South Brittany, has been crowned 2021 Class40 Champion, rounding off what has been a remarkable season. Having scored a number of victories and podium results over the years on the Class40 circuit, Antoine has now taken the overall title for the first time as skipper of his own project on his Mach40.4 Redman, taking over the mantle from 2019 Champions, the Franco-Italian team of Catherine Pourre / Pietro Luciani (the title was not awarded in 2020 due to the lack of races).

The races attracted large numbers of Class40s, with numerous skippers in with a chance of victory. Predicting the top three finishers at the start of each of these races was anyone’s guess.

And so it proved to be that each race delivered fierce competition on the water, right down to the last miles. In the opening race of the Championship, the CIC Normandy Channel Race, won by Axel Tréhin and Frédéric Denis (Project Rescue Ocean), just 3 minutes separated second-placed Lamotte Module Création (L. Berry / A. Nebout) from third-placed Redman (A. Carpentier / P. Santurde del Arco).

In the Les Sables – Horta race, the margin was yet again a mere 3 minutes, this time between the winners Redman (A. Carpentier / M. Mergui) and runners-up Project Rescue Ocean (A. Tréhin / F. Denis). The battle was equally intense mid-fleet, with no less than 8 boats crossing the finish line in the space of 2 hours after 2540 nm non-stop racing, the stopover having been cancelled!

The biennial Rolex Fastnet Race was won by Antoine Magré and his Franco-British team (E.Leclerc Ville-la-Grand) after a little over three days of racing. Banque du Leman and Lamotte Module Création went on to complete the podium in just 12 minutes! Antoine Carpentier and his team finished in 4th place just 13 minutes adrift.

After these 3 major races, Antoine Carpentier was leading the championship, but not by much, and the competition in the Transat Jacques Vabre Normandie Le Havre promised to be formidable with 45 Class40s on the start line, including a number of new boats and serious contenders…  But “good things come in threes” as the saying goes: having won the race in 2017 on the Class40 V and B, and in 2019 in the Ocean Fifty class, Antoine Carpentier once again crossed the finish line in first place, this time racing with Pablo Santurde del Arco.

And what an incredible race! No less than 18 boats crossed the finish line within 22 hours of Redman’s victory, with the podium complete within 1 hour and 3 minutes...

He is discreet and talented. He is Spanish but speaks at least 4 languages. He is young (34) but already has an incredible CV. Pablo Santurde del Arco is the go-to crew, sought after by numerous skippers. J80 World Champion, winner of the Transat Jacques Vabre and the 2021 40 Malouine Lamotte, winner of the RORC Caribbean 600 in 2018 and 2019, the 2018 Round Britain & Ireland Race, the Normandy Channel Race and Les Sables – Horta in 2017, the 2016 Quebec – St Malo Race...

All the winners of the Class40 Championship over the past few years have one thing in common: they have raced with Pablo as crew !

The 2021 Championship has been a great success: 55 boats ranked, 11 nationalities represented, 11 new boats on the water this season… it took consistent results at the front end of the fleet to clinch this ever-more international and closely fought Championship.

But the performance of non-scow Class40s should also be mentioned: Luke Berry finished in 3rd place in the Championship on his 2018 Mach 40.3, the young duo on Legallais (P. Casenave-Péré/K. Bloch) took a fine 5th place in their first season of racing on their 2015 Mach 40.3. Maxime Cauwe (Avanade) on his 2010 Tyker finished a superb 8th, the 2014 Pogo S3 Vogue Avec un Crohn (PL Attwell/ M. Bensa) finished 9th and Ivica Kostelic on his 2013 Mach took 10th place.

Also deserving of a mention is the fine achievement of the Class40 Terre Exotique, the first ever Class40 built in 2004, and though it may have been last across the finish line in Martinique, the boat nevertheless finished the 4600 nm race within the time limit and less than 6 days behind Redman.

Rendez-vous in 2022 for a season that will no doubt deliver at least as much competition, a further ten or so new boats and a year that features some exciting solo racing !

In their own words:

Antoine Carpentier: “I am thrilled to have won the 2021 Class40 Championship. It marks the end of a great season, consistent podium results, good co-skippers… thank you Pablo and Mikael who significantly contributed to this result. Thank you to my sponsors and the race organisers, who managed to run their events despite the situation.”

Valentin Gautier: “We are really pleased with our second place. It reflects our consistent performance over the course of the season, because even though we don’t always finish on the podium, we have always managed to place in the top 5, which is fairly positive.  Given how the level of competition in the class has increased, getting a top 5 result is already pretty good, and so we are pleased with ourselves! It is also the reward for having a new boat at the beginning of the cycle in 2019. We have worked hard on the boat and now know her inside out. That had a positive impact on our consistency and this result. A big thank you to our sponsors for supporting us.”

Luke Berry: “I’m really happy with this 3rd place in the Championship, the reward for consistency over the season, with two podium results and two 5th place finishes. I am all the more pleased because it was my last season with the boat, and this third place is the culmination of four seasons spent racing this Mach 40.3. It also shows that it’s possible to put in solid performances with boats that are not scows, because the racing over the year is in a variety of conditions allowing for tactical options. I would like to thank my sponsors and my crew.”