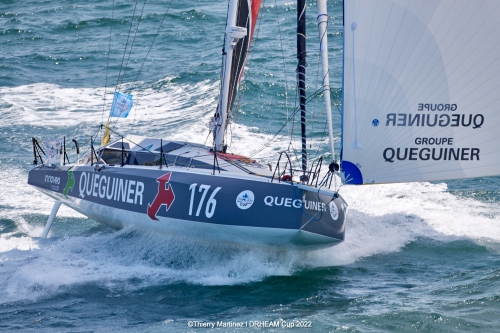 The Class40 European Trophy has this year been awarded to Corentin Douguet, racing on his Lift v2 Queguiner – Innoveo. He takes over the title from 2021 winner Antoine Carpentier (Redman). Having scored podium finishes in every race he competed in this year (two victories and two second place finishes), Corentin Douguet wins the title for the first time on board his Class40 Queguiner – Innoveo in the face of an ever more competitive fleet. Axel Tréhin (Project Rescue Ocean) finishes in second place. The pair of Matthieu Perraut / Vincent Lancien (Inter Invest) complete the podium.

“This is my first season on the circuit, so I am thrilled to have won the European Trophy.
Class40 is the perfect cocktail, with serious competition on the water, on boats that are quite demanding, but in a laid-back atmosphere,” C. Douguet summarised.

The European Class40 season kicked off at the beginning of April with the 1000 milles des Sables, a qualifying race for the upcoming Route du Rhum destination Guadeloupe. This was Corentin Douguet’s first race on his red and grey Lift v2 and his first victory, finishing ahead of Ian Lipinski (Crédit Mutuel) and Axel Tréhin.

The following week, it was the turn of Nicolas d’Estais (Happyvore) and his crew who won the Armen Race. In June, the SSE Round Ireland Yacht Race gave Andrea Fornaro (In Fluence) his first victory on the Class40 circuit.

The second solo race of the season, the Drheam Cup, saw 37 Class40s take on the 1000 mile course between Cherbourg and La Trinité sur Mer. This time around, it was Xavier Macaire (Groupe SNEF) who finished first, ahead of Corentin Douguet and Simon Koster (Banque du Leman).

In August, complicated weather made for challenging racing in the Sevenstar Round Britain & Ireland Race, with victory going to Irish sailor James Mac Hugh (Tquila).

The winner of the European Trophy would therefore be decided on the outcome of the 40 Malouine Lamotte, a 24 hour offshore race from Saint-Malo. Corentin Douguet scored his second win of the season, winning the 2022 European Trophy in the process.

There are two additional points of note: there are three “pointy-bow” Class40s ranked in the top ten (the top one being seventh-placed Pierre Casenave-Péré on his Mach 40.3 Legallais), and Finnish sailor Ari Kansakoski has scored a fine twentieth place ranking on his 2007 CC40, making it the top-placed Vintage boat.

The upcoming Route du Rhum destination Guadeloupe, which starts on the 6th of November, will see a fleet of 55 Class40s on the starting line. The 2022 Class40 Championship will be decided at the end of this race.

In their own words

Axel Tréhin: "I am really happy with this result which is the reward for a solid second season at the helm of my Class40 Project Rescue Ocean, despite the arrival of a number of seriously talented sailors on the circuit. I am proud to be a member of this flourishing class, and to be able to sail on these exceptional boats which enable us to compete in the great offshore races on a reasonable budget. From a personal standpoint, I am also very pleased that my efforts on the water help to highlight the commitment of all the volunteers involved with the Project Rescue Ocean charity who work hard every day to heighten awareness of the urgency to reduce our use of plastic. Please feel free to join us!"

Matthieu Perraut: "Overall, we are delighted with our boat! Having a new boat was a challenge for us, both learning to sail it and making it as reliable as possible. We are very happy with the first results of the season, and couldn’t have wished for more for our debut! The level of competition has gone up a notch now that all the boats competing in the Route du Rhum are here; it only serves to motivate us more! As for the class, the mix of Class40 veterans, and Mini, Figaro and Corinthian sailors makes for a fairly diverse class with people from many different backgrounds, which is rather cool. And more generally, even though everyone is out there to win, they are friendly people with whom we share good times before but especially after races."