The sea for some, the bitter for others 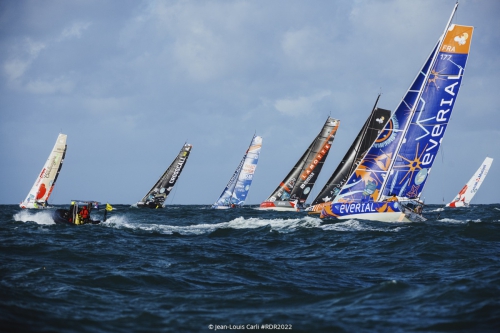 The first few hours of this 12th Route du Rhum - Destination Guadeloupe are true to their reputation, with an endless litany of inaugural misfortunes at sea, which are either damaging or compromising the smooth running of the great crossing that has been mobilising the sailors for many months. For others, the race has taken its toll from the outset. This Thursday, after 24 hours at sea, it is Keni Piperol (Cap'tain Alternance), who is enjoying the pleasure of leading the way to Guadeloupe on a trajectory close to the direct route. After the English Channel and the Iroise Sea, the doors to the ocean open, indicating to all the time of the great strategic choices...

After 24 hours of racing, the fate of Antoine Magre (E.Leclerc Ville-La-Grand) who ran aground during the night off the island of Batz and who has just officially declared his retirement this afternoon is emblematic. Just like the collisions experienced by Martin Louchart (Randstad Ausy) who is heading towards Saint Malo, as well as Mickael Mergui (Centrakor). These are all hard knocks that force the sailors to make a stopover.

On a stopover in Saint-Malo or Camaret

"I was fine, I was supposed to be 30 minutes from the Brest Narrows this morning. There was a big wave, the boat went down and I hit a buoy on the port bow. I thought I was literally going to climb the buoy and put the mast in it, I was scared to death," confided the Mediterranean skipper Mickael Mergui, who returned to Camaret to examine the extent of the damage with his team. As for Pierre-Louis Attwell (Vogue with a Crohn's), the technical damage he encountered last night was sufficiently serious to make it to this port in Finistère. And that's without taking into account the problems that quickly accumulated (pilot failure, torn genoa) for the skipper from Saint Malo, Geoffrey Maczynski (Fortisssimo), aboard one of the oldest Class40 boats. He is currently on a stopover in Saint-Malo. Since the start of the race yesterday, six competitors have already experienced their share of major difficulties, which will inevitably leave a bitter taste in the wake of this early race.

For most of the 54 other candidates still in the race, the scenario is taking a much better turn. If for the time being, it is more in the mode of a contact race that they have been sailing in wind and sea conditions that are gradually becoming stronger, the longer term strategy is now on the agenda. And for good reason, it is a question of making a crucial choice between divergent trajectories in the light of a weather forecast that promises to evolve in a very contrasting way. And for good reason, they will have to make a crucial choice between divergent trajectories in view of the weather, which promises to evolve in very contrasting ways: the route towards the west, which is very committed, and another more southerly route, where they will have to be careful to avoid being trapped by lighter winds in the Bay of Biscay. Faced with this dilemma, it is not surprising that a 13-mile gap now separates Kéni Piperol (Cap'tain Alternance), Marc Lepesqueux (CURIUM Life Forward), or Alex Mehran (Polka Dot), from a small group progressing a little lower down, where Ambrogio Beccaria (Alla Grane - Pirelli), Ian Lipinski (Crédit Mutuel) This means that the chessboard is still open, with the top 10 boats within 7 miles of each other.

It 'fixes', and they're off again

For Axel Trehin (Project Rescue Ocean), and Yoann Richomme (Arkéa Paprec), who had a hasty start that resulted in a four hour penalty, which they have already "repaired", the hunt for the leaders is on. "This penalty is not something that is easy to take. Fortunately, I was able to limit the damage with a good timing to repair before Fréhel, which limits the damage to about twenty miles behind the leaders. The bill could have been much higher than that," says the title holder, who is not minimising the blow to morale of this setback. But true to form, it is with his mind set on the next stage that he is progressing today. "We're off again now, upwind. It's quite choppy, windy, up to 27 knots as we pass Ushant. We're starting to head west on a very long tack which will take us 2 to 3 days. The prospects for the next few days are not very exciting with the weather being tricky to manage...". After 200 miles covered since yesterday at 14:15, the race has only just begun...