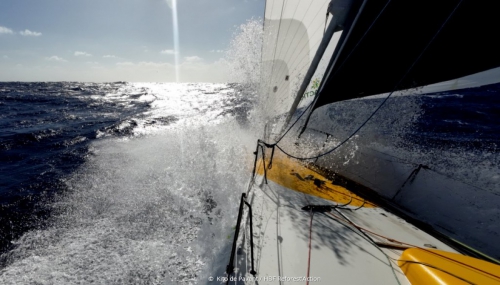 He is heading for the finish, which he should reach in the next 24 hours. Barring any last minute changes, Yoann Richomme (Paprec Arkéa) is expected to be the big winner tomorrow morning in Pointe-à-Pitre (from 3pm, mainland time). The leader, who is almost untouchable, is on course for a historic double in the Class40 category in the Route du Rhum - Destination Guadeloupe. To make matters worse, he is making progress with the promise of breaking his own reference time, set four years ago, by almost 48 hours. But in his wake, the battle is raging at all levels. From one side to the other, the race is redoubling in intensity. Each place in the ranking is being fought for dearly, very dearly. Starting with the podium, with two protagonists who have not finished chasing after the leader. The duel between the Italian Ambrogio Beccaria (Allagrande-Pirelli) and Corentin Douguet (Queguiner-Innoveo), neck and neck with 400 miles to go, is superb. With less than a mile to go to separate them, it is guaranteed to keep the suspense alive right to the end of the line, after a round Guadeloupe that has no equal in offering its share of inevitable twists and turns.

"The match with Corentin is exciting. Yesterday, it was a bit of a toss-up, I was on the wrong side of the cloud and he put a lot of miles on me. Today it's my turn to make up some ground, even if I think he still has a bit of a lead. Ambrogio Beccaria's words are unmistakable as he enjoys the "magical feeling" his boat offers him. "Now I have the chance to exploit her potential. It's an aeroplane!" At an average speed of 15 knots over the last 24 hours, the Italian is giving his best against a direct opponent who is not giving up in the strong trade winds either. 90 miles from the leader, it is in oceanic match-race mode that these two are progressing towards the finish.

But they are not the only ones, as from one side to the other, the solo sailors, very grouped together, are reporting committed conditions that leave no respite. "Here, it's sailing in the trade winds like in the books, with strong winds, waves and sun. And to make it fun, we're mixing in a few squalls. In terms of competition, the gaps have widened a bit, but I'm still on the attack. You never know! The friends behind are not that far away," said Simon Koster (Banque du Leman). The Swiss, in 4th position, is well placed to know that his pursuers, in ambush, will not let the slightest opportunity slip through their fingers. The battle of the scows is getting tougher as the miles go by in the well established 17/18 knot trade winds. Xavier Macaire (Groupe SNEF) and Luke Berry (Lamotte-Module Création), 5th and 6th respectively, are also within a mile of each other. Watch out also for Antoine Carpentier (Redman), or Alberto Bona (IBSA) who are both very consistent at the front.

A mess, and it's off again

In the ranks of the fleet, many are racing on the ocean as if they were sailing in a bay, by position reports. But in this context of heightened competition, the slightest worry is paid for in cash. Everything is played out according to the squalls and the sudden and violent wind shifts that affect the solo sailors. Under spinnaker and clouds, there are many adventures. "The boat went into overdrive at 25 knots in a wave and landed nose down in the water. There was a huge overload on the spinnaker and the spinnaker, God rest her soul, gave us back her soul," said William Mathelin-Moreaux (Dékuple). In 17th place, the skipper who is about to repair this precious sail, is battling it out in a small, compact group including Baptiste Hulin (Rennes / Saint-Malo / Parenthèses de Vie), Jules Bonnier (Nestenn-Entrepreneurs pour la planète), and the American Alex Mehran (Polka Dot). And that's without counting on the southerners of yesterday who are back in the battle as the wakes converge in the direction of Guadeloupe. This is the case for Cédric Chateau (Sogestran Seafrigo), who after having seen his boat go down in an oversold condition is making a good 15 knots like the leaders. A loose wind and they're off again!

Ambrogio Beccaria (Allagrande-Pirelli): "I'm managing to make good speeds, to get a bit of work done
"Since the start, I've had my ups and downs, and today I'm at the top. I understand the clouds better and I can play with them. I feel more comfortable. This is my first solo race on this boat and it took me a little while to get the hang of it in the fast moments. Now, I'm able to make good speeds, to sail fast, and I'm very happy with that. The match with Corentin is exciting. Yesterday, it was a bit of a struggle. I was on the wrong side of the cloud and he put a lot of miles on me. Today, it's my turn to make up some miles, even if I think that in relation to the goal and if we gybe, he should still be 10 miles ahead. But we still have 24 hours to go and there is still the rounding of Guadeloupe to do, which leaves the game wide open. The feeling on board my boat is magical. I really appreciate how lucky I am to be able to exploit her potential. It's a plane! It's fast in all conditions, even if since the second front I've had no air and no information, which makes it difficult to make tactical choices, especially regarding the sails. And the pilot doesn't work in wind mode. When you have to go straight, it's fine, but when you have to go fast in relation to the goal, it's not great, even if I manage. The end of the race is going to be incredible in terms of intensity and that's why last night I tried to get as much sleep as possible.