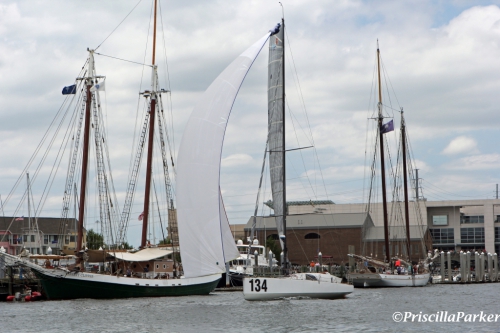 With a fleet of four Class 40s competing in the inaugural Ocean Race North,  #134-Stella Nova, skippered by Germans Joerg Reichers and Alex Krause , crossed the finish line first at 12:47:09 ET on Monday, May 25, with an elapsed time of 70:42:09 to complete the 512 nautical mile course from Charleston, S.C. to Annapolis.

The race began at 2:05 p.m. on Friday, May 22th from Charleston Harbor, with teams from the USA, France and Germany exiting the harbor in an upwind dying breeze. #134 Stella Nova was the first to exit the harbor.  Remaining tightly packed, all teams headed due east for the gulf stream to pick up the added 3 knot current push to send them north. #118 - Oakcliff Racing was the first to turn north into the stream taking a more westerly course. #134 Stella Nova chose to sail the furthest east of the entire fleet.

Conditions in the Gulf Stream had teams seeing 20-30 knots of breeze with a very challenging sea state and it was there that #134 - Stella Nova tore their mainsail and needed to double-reef until they were able to reach the Chesapeake.

Heading into the Chesapeake #54-Dragon and #134 Stella Nova were within 10nm of each other. However, Dragon parked up in a wind hole for approximately 3 hours which allowed Stella Nova to edge ahead. Coming up the Chesapeake provided fast downwind running conditions for the teams allowing them to finish under spinnaker.

“The strategy was going out into the Gulf Stream and when we came close to Cape Hatteras we took another 20 mile tack out into the Gulf Stream. It was a little bit risky because we were sailing away from the fleet, but I think it paid big time because it gave us 3 knots of current. Our mainsail also ripped after 20 hours of racing so we did nearly all of the race with a double-reefed mainsail, which wasn't as fast.”said Joerg Reichers, skipper of Stella Nova.