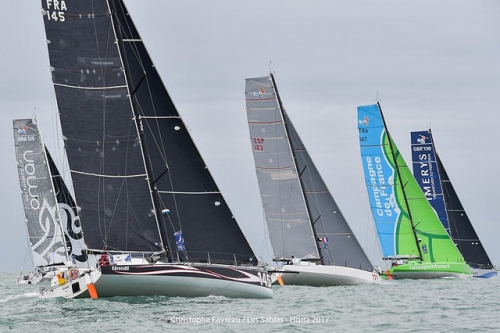 Regarded as the big favourite before the start, the spanish duet Pablo Santurde del Arco / Gonzalo Botin wins again on the Class40 circuit but for the first time on Les Sables-Horta.
Winner of the first leg before Imerys #130 (P. Sharp / C. Douguet) and Stella Nova #134 (A. Krause / A. Carpentier) and third of the second leg behind Aïna Enfance et Avenir #151 (A. Chappellier / A. Le Vaillant) – which has surprised for her first race – and Imerys (P. Sharp / A. Hardy), Tales II finished with the overall win 13 minutes only before the second. A moment of intense emotion for the last race of the team : the boat had been sold.

From most points of view, this race was a success : on the water where the 19th boats fought hard in many weather conditions (good thing for the cartography addicts !) and ashore where friendliness and mutual aid remain the key words of the Class.

On the vintage side, Cédric de Kervenoael, with Robin Marais and Rémi Beauvais, wins overall.

-          The consistency of Serenis Consulting (J. Galfione/ JC Caso/ N. Troussel) always in the top quarter of the ranking.

-          Oman sail, new in Class40, who despite a few tehnical problems,  showed her ambition to head to the top of the rankings.