Winner of the first Leg between Charleston and New York, Eärendil duets (Catherine Pourre / Pietro Luciani) confirms by winning the second leg of The Atlantic Cup ! 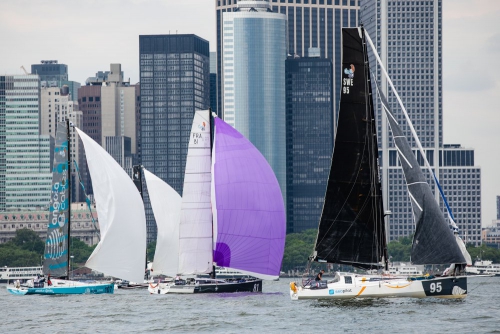 From the Angola Cables Start Line in New York City, the fleet of Class40s battled upwind to round the virtual mark ‘Point Alpha’ off the Nantucket Shoals. Throughout the race to Portland, competitors fought gusts of up to nearly 40 knots and a steep and choppy sea state that brought physical, mental and mechanical challenges. While two boats, First Light and Espirit Scout, retired to take refuge in Newport, Rhode Island, the remaining nine Class40s have made their way around Cape Cod and into the safe harbor of Casco Bay in Portland, Maine.

After rounding Point Alpha, Eärendil leaped ahead, taking the top spot on the podium early Tuesday morning with an official finish time of 03:41:28. Eärendil was followed by Toothface and then Dragon just a few hours later. The 2nd and 3rd place boats had been in an intense match race, often within hailing distance of one another. Following Dragon was Angola Cables, Amhas, Privateer and then Oakcliff Racing. These teams celebrated a safe leg and successful finish on the dock with a bottle of Shipyard Brewing’s finest beers.

Talanta and Power of One are expected to arrive early Wednesday morning, in just enough time to recover for Thursday’s Kid’s Day.