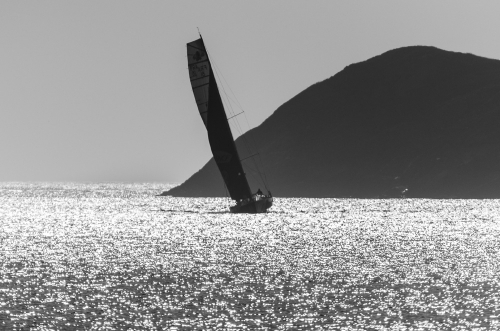 3 Class40 participated in this race :

-          Philippe Paturel, the event organizer, rented for this occasion Oakliff Sailing’s Kiwi40, USA  118. One of his crew was Sylvain Barrielle, his co-skipper on the second leg of the Atlantic Cup ; another crew was a special well-known guest, the race’s sponsor, Titouan Lamazou.

-          The Canadian Eric Tabardel made his come back on the Class40’s circuit onboard Bleu, CAN 35. Among his crews, Damien de Pas, race manager of the last transat Québec Saint-Malo.

-          The French of Esprit Scout, FRA 81, did there their last race of the season in the West Atkantic side. Onboard for this race, Marc Dubos, Jacques Arnaud Seyrig, Stéphane Bry and Bettina.

Marc Dubos: « The first section of the race was really nice, with a great reaching lega long Nova Scotia. Then, the wing changed a little, increased and we had to gib downwind. We tore our 2 spinnakers and had only our Code 5 left. An extraordinary welcome, it’s  awesome ! In addition, the weather is very nice, we are very happy to be there !un Accueil extraordinaire, on ne sait plus où donner de la tête tellement c’est génial. »

RDV probably in 2020 for a nice event between The Transat, The Atlantic Cup and The Québec Saint-Malo !