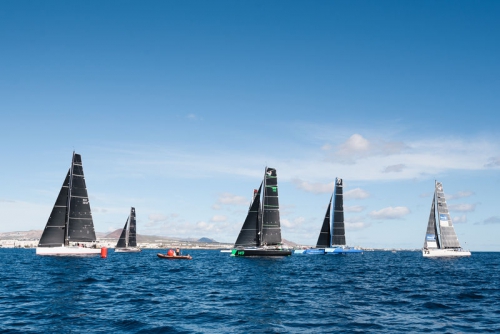 After completing the race, Catherine and crew members Pietro Luciana and Gery Atkins received a warm welcome from RORC Race Officer Steve Cole, and Marina Manager Charlotte Bonin greeted the team with ice cold beers. Nikoyan Roberts presented Eärendil with a basket of Grenadian goods, including rum and chocolates, courtesy of the Grenada Tourism Authority. There was also a surprise welcome on the dock from friends Halvard Mabire and Miranda Merron - who was fresh from her Route du Rhum adventures with Class40 Campagne de France. In the 2016 race, Campagne de France had won class ahead of Eärendil, but this year it was Catherine Pourre's turn to celebrate finishing the race in pole position for the Class40 Division in a time that was over three days quicker than 2016.

"The conditions this year were much easier than in 2016 because the wind was much more stable and we had very few squalls," commented Pourre. "We had some good wind to test the modifications to Eärendil. Whilst we had problems with the new rudder system and also electronic issues, the boat is faster, which was our main goal. Racing with Gery and Luciana was superb; they are both easy-going characters, but they know how to push a boat hard. We saw 20-25 knots of wind for long periods, so we were really flying, but with our main competition Hydra falling behind after their pit-stop, we could be a little more conservative. It was a real shame that Hydra had to stop for a while in Cape Verde as we were having so much fun."

Henrik Bergesen's Norwegian Class40 Hydra, skippered by Tristan Kinloch, finished the RORC Transatlantic Race at 22:02:23 UTC on Sunday, 09 December in an elapsed time of 15 days 10 hrs 2 mins 23 secs. Hydra was runner-up in the Class40 Division to Catherine Pourre's Eärendil. Early in the race, Hydra was very much in contention for the class win until a rudder problem forced the team to make a pit stop in the Cape Verde Islands. After completing the race, Hydra's team received a warm welcome on the dock from RORC CEO Eddie Warden Owen and Race Officer Steve Cole. Marina Manager Charlotte Bonin greeted the team with ice cold beers and presented the crew with a basket of Grenadian goods, including rum and chocolates, courtesy of the Grenada Tourism Authority.

It's been an epic race; absolutely fantastic," commented Henrik Bergesen dockside at Camper & Nicholsons Port Louis Marina. "I have had a great crew and we had perfect conditions. We had an issue with the rudder, but we came back and did a good job; we kept going and got back into second place, so I am very happy about that. After eating freeze dried food and desalinated water, the beer tastes really good. We are looking forward to some real food; barbecue chicken I think! After this race, we're well prepared for the RORC Caribbean 600 in February and it should also be great fun."

Stephane Bry's Sirius completed the podium for the Class40 Division, finishing in an elapsed time of 16 days 08 hrs 33 mins and 26 secs. French Canadian Stephane Bry is no stranger to Grenada and he was delighted to return having finished the race: “Arriving in Grenada just before sunset was really cool and I have great memories of my stay here last time. My family will be joining me here for Christmas,” commented Stephane. “Out in the Atlantic it is another world; home is far away. On board you eat freeze dried food and you make economies with water and energy. This crossing was really simple, but it was still fantastic and amazing. The Sirius crew are really cool, I have raced against them and also with them. We had the Finnish on one watch and the French on the other. We had a competition for the best boat speed and it was really close, but the French team got 20.9 knots of speed!”