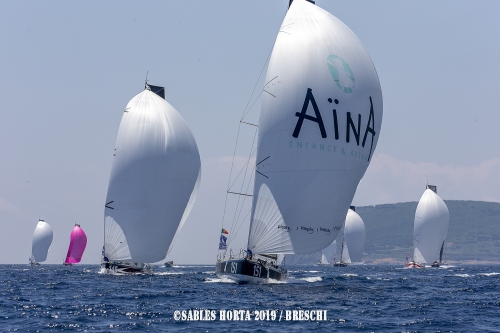 As only 34 minutes separated the 1st and the 3rd at the finish of the first leg in Horta, the second stage had to be a decisive one, and, as expected it reshuffled the cards creating large gaps. The duet Aymeric Chappellier – Rodrigue Cabaz were the best, arriving in Les Sables d’Olonne 1h08 before Catherine Pourre and Pietro Luciani, and 2h47 before William Mathelin – Moreaux and Marc Guillemot.

The 7th edition of the Sables-Horta kept all of its promises. The first success was the participation of 31 sailors, leaders of the Class or newcomers happy to race offshore for the first time on a very interesting route. The very pleasant conditions, with downwind sailing most of the time during the two legs, allowed Aymeric Chappellier to break the 2017 record for more than 22 hours and to establish a new record at 10 days 11 hours and 58 minutes.