A Mach40.4 for Antoine Carpentier 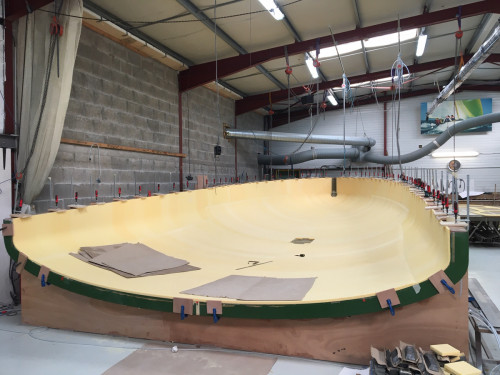 © Antoine Carpentier
For the first time in its history, Redman, a committed promoter of a low carbon and inclusive city, is committing to a major sports sponsorship until 2022, supporting skipper Antoine Carpentier on the Class40 circuit. The group and the yachtsman have thus launched the construction of a new Mach40.4, the design of which has been entrusted to the JPS Production shipyard in La Trinité-sur-Mer. The boat is scheduled to be launched at the end of the summer. A double-bottomed project for Redman: supporting the skipper in all aspects of his project and identifying with the strong values of sailing.
A STRONG AMBITION FOR REDMAN
"The choice of ocean racing is a consistent bias for Redman. Sailing is a very unifying sport, which conveys positive values in line with those of our group. Synonymous with dreams and adventure, escape and solidarity, at sea as well as in companies, it is about the quest for challenge and performance, the culture of humility and surpassing oneself. Moreover, sailing is a sport with a strong environmental conscience, which is in line with our DNA" explain the two partners of Redman, Matthias Navarro and Nicolas Ponson who have chosen to accompany Antoine Carpentier, Two-time winner of the Transat Jacques Vabre and the Transat Québec - Saint-Malo and four-time winner of the Tour de France à la Voile, among others, one of the most accomplished records in French sailing, which is about to change dimension by finding itself propelled at the helm of its own project alongside Redman.
A PROJECT FOCUSED ON PERFORMANCE
"The Mach40 version 4, the first example of which was seen racing for the first time during the last edition of the Transat Jacques Vabre, showed its incredible potential. Its hull allows the class rule to be exploited to the maximum. Anything that is not structural aboard the monohull will mainly be made from bio-sourced composites. In this respect, I'm already working with Tual Le Guillerm and his company Crazy Lobster, which specialises in R&D and the manufacture of composite parts," commented the sailor from La Trinité, who wants to bring a "green" touch to his project without putting performance to one side, with victory in the Route du Rhum - Destination Guadeloupe in 2022 in his sights.
A WINNING PROJECT
"This new project is a winning project," emphasises Antoine, whose assets are numerous, starting with his rigour, determination and considerable experience, in terms of navigation of course, but also in terms of development and performance after many years spent fully committed to all the skippers he has worked with. "With the launch of this boat, two thirds of the way to a great story has already been made," concludes Antoine Carpentier, who intends to excel both in the role of project manager and in all the roles he has held up to now.
source: Release Redman / Antoine Carpentier / Lucile Troel https://bit.ly/3eEN7pU