Ian Lipinski to attack the Round Britain and Ireland record! 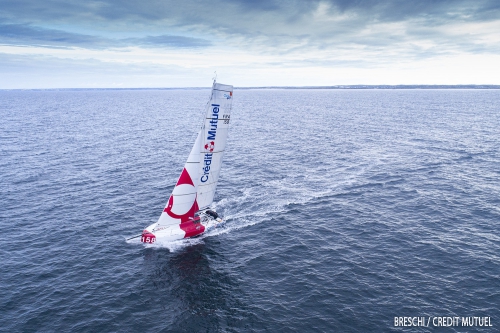 At 6 hours 21 minutes and 25 seconds this morning, Ian Lipinski crossed the start line at Cape Lizard for his round the Britain and Ireland record attempt. In solo racing, the skipper of the Class40 Crédit Mutuel aims to do better than the 8 days 4 hours 14 minutes and 49 seconds of the Phil Sharp crew in 2018.

For several days now, Ian Lipinski and his team have been monitoring the evolution of the train of the depression sweeping westwards through France and the United Kingdom. They had been waiting for the right moment to take up this challenge between the English Channel, North Sea and Atlantic.

Yesterday, Wednesday, the Class40 Crédit Mutuel left Lorient and took up position off Cape Lizard, at the southern tip of England, with the intention of completing the great British loop from east to west.

Carried by a 15 knot W'ly wind, Ian set off this Thursday shortly after 0600 hours, heading for the English Channel, then the North Sea, where winds of 20 knots should be waiting for him. These good downwind conditions remain tinged by the uncertainties linked to the nature and strength of the low pressure system expected in the north-west of Scotland, around the Shetlands. If the strength of the gusts predicted by one of the weather models is confirmed, Ian Lipinski could opt for a wiser solution so as not to put himself in danger. Ashore, the router meteorologist Christian Dumard and the technical director of Crédit Mutuel, Sébastien Picault, will be on watch. In the squalls. And the gain.

Ian Lipinski: "Before setting out to sea, I always feel apprehensive. It's a common feeling during races. I know it and I'm predicting it to increase. In this case, with the pressure of the record, the situation is different. Everything is rushing, the countdown to the start as well as the emotions. What's great is that I'm attacking the record in good conditions, perhaps under a big spinnaker, which will be perfect to get into the rhythm. I'm going to try to do well to gain experience. If all goes well, I'll be able to take up the challenge and complete this lap, but safety remains my priority".

The time to beat: 8 days 4 hours 14 minutes and 49 seconds: Phil Sharp and his crew (Julien Pulvé, Pablo Santurde del Arco and Sam Matson) in 2018, during the last edition of the Round Britain and Ireland Race, at an average speed of 9.03 knots (16.7 km/h).

The theoretical distance to be covered is 1773 miles along the coast of the British Isles (3283 km).