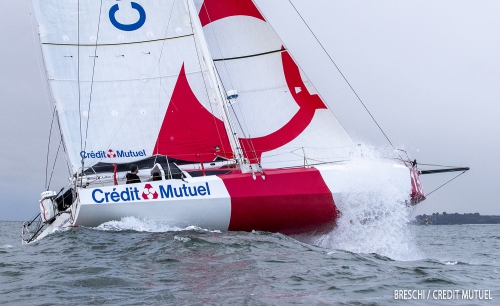 Ian Lipinski is the new record holder of Round Britain and Ireland record in Class40. This Friday 10th July, the skipper of Crédit Mutuel crossed the virtual finish line by crossing Cape Lizard after 7 days, 17 hours, 50 minutes and 48 seconds of racing (subject to validation by the World Sailing Speed Record Council).

The skipper of Crédit Mutuel crossed the finish line today at 00 hours 12 minutes and 13 seconds. Starting from the same cape in the south of England a week ago, Ian Lipinski beat the previous record set by Phil Sharp in the crewed Race Around Britain and Ireland in 2018.

Ian Lipinski: "Beating this record was a real challenge for the shore team as well as for me. We had the boat, the technique and the will, but the sea always brings its share of surprises. We achieved this result at the price of a total and uncompromising investment, thanks to the constant commitment of my entire team, the support of all our friends and the undeniable qualities of the Class40 Crédit Mutuel. »

The course of the record

Thursday, July 2, Day 1 - At 6 hours 21 minutes and 25 seconds this Thursday, Ian Lipinski crossed the virtual start line, under the control of a WSSRC reference, the World Sailing Speed Record Council, which records ocean racing records. From Cape Lizard, at the southern tip of England, the skipper of the Class40 Crédit Mutuel is heading east.
To be raced: 1773 miles. To be beaten, Phil Sharp's time, with crew: 8d 4h 14min and 49 sec.

Friday, July 3, Day 2 - Between France and England, Ian is making good progress, despite the pitfalls (shipping traffic, traffic separation devices, wind farms, shifting sandbanks). After 24 hours of racing, he has a 55 mile lead.
Saturday, July 4, Day 3 - The gruelling Channel crossing is over. Passing the mouth of the Thames was no easy task, but here he is sailing up the coast of England in a light breeze, which is not helping him in his goal: to escape from a depression, which is a little too big for a Class40. At 0522 hours this Saturday, Ian had a 206 mile lead over the record.
Sunday 5th July, Day 4 - The brutal depression has been avoided. Off the coast of Scotland, Ian "knitted" his way up to the northern tip of the Shetland Islands, the northern end of his course. His lead has shrunk to 33.6 miles.
Monday 6th July, Day 5 - Class40 Crédit Mutuel rounded the Shetland Islands, then encountered violent winds which forced him to put a lot of pressure on the boat. Ian began the descent from the British Isles via the west face with a 30 mile lead. The weather is not simple: the sequence of weather systems and its alternation of lows and high pressure systems causes the wind angles and strength to oscillate.

Tuesday, July 7, Day 6 - For the first time, Ian Lipinski falls behind the record. The wind, which was forecast to be downwind, i.e. on the beam, turns out to be coming from the front. The solo sailor has to go down the coast by a compulsory route and then upwind. This Tuesday was much harder than expected. Hampered by technical problems linked to the difficult passage through Shetland, Ian has had to adapt and deprive himself of precious hours of sleep. To complete this picture of a black Tuesday, Ian remained stuck in a windless zone for 5 hours.
Wednesday 8th July, Day 7 - With a deficit of 144 miles, the attempt remains compromised. The skipper of Crédit Mutuel is nevertheless trying his luck by relying on Christian Dumard's theoretical routing. Phil Sharp and his crew were slowed down at the end, when his record was set in 2018. So there is still a chance!

Thursday, July 9, Day 8 - A sailor doesn't need much to feel good: all he has to do is move forward. Since the morning of July 8, Ian Lipinski has been moving forward. And it's getting better, much better. 150 miles behind Phil Sharp's record at 8h30 on Wednesday, the skipper of Crédit Mutuel keeps going back up this virtual time. He is 50 miles behind but the speeds are high again.
Friday, July 10, Day 9 - It is at precisely 00 hours 12 minutes and 13 seconds that Ian Lipinski at the helm of his Class40 Crédit Mutuel crosses the virtual finish line off Cap Lizard. It's won! Single-handed, Ian Lipinski beat the record set by Phil Sharp in the crewed race by 10 hours 24 minutes 1 second.