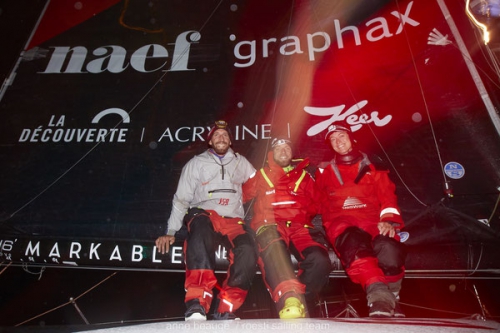 The Roesti Sailing Team broke the fully-crewed Round Britain and Irland record last night. Starting on August 17th from the virtual line off Cap Lizard at 15h42min26 sec UTC, it crossed the same line tonight at 22h09min51' UTC. The record time of the Class40 Banque du Léman is therefore 7 days 6 hours 27 minutes and 25 seconds. Valentin Gautier, Simon Koster and Justine Mettraux thus set a new crewed record in the category of boats up to 40 feet (subject to ratification by the WSSRC). The previous record was held by Ian Lipinski in 7 days, 17 hours, 50 minutes and 48 seconds, achieved at least in July alone.

After a relatively slow start to the race, the Swiss trio seized one opportunity after another: following a series of transitions, fronts and lows, they made the most of the weather analyzed with their router Julien Villon to finish half a day ahead of the set time.

"I have the impression that we spent quite a bit of time in light winds or in transitions," says Simon Koster from Zurich. "In the end, we still arrived about ten hours early. Luckily we had some very fast phases! With the sequence of several weather systems, we had to fight until the end to make it happen. We could never be sure that it would pass "cleanly". Technically, it went well, we just had a small problem with the hooking and the halyard, two or three little things but nothing disabling. It's a great reward to have managed to beat the record, our main objective, for which we had to work hard! »

The Swiss Valentin Gautier is equally delighted: "It's great form aboard Banque du Léman, the job is done! The wait for a weather window has been long all summer. It's a great satisfaction to have fulfilled the objective and to have been able to offer a record to our sponsors who have been loyal to us this year. This is a way for us to thank them! What made the difference is the same recipe as for all the records: good weather and the ability to use the boat at 100% of its capacity on the chosen window are essential. Humanly it was great, a good mix of concentration and relaxation when we could afford it, a good recipe! »

Valentin and Simon were joined by the experienced Geneva sailor Justine Mettraux for this record attempt. "I'm super happy, it was great to be able to sail this course with Simon and Valentin on this great boat. There was a lot of pressure on the descent because as time went by, the weather was getting worse, we had less wind and therefore more pressure to get there on time. Julien Villon who did the weather and the routing on land helped us a lot, especially at the end of the course which was complicated. Thanks to him! We fought well to go as fast as possible. To beat the record with this advance is a satisfaction! »

The team is delighted to have been able to wear the colors of its three main partners on this record: Banque du Léman, Graphax and Naef. The Roesti Sailing Team would like to thank TeamWork for making Justine available for this adventure, and is delighted with the loyalty of all its sponsors and partners despite a complicated season.

The video was filmed a few hours before their arrival, by the media woman Anne Beaugé who sailed with them on this record!

"It was an unforgettable experience to follow the Roesti on this record! Photographically, they are great models, intense in what they do and they don't pay attention to my lens! It's a first experience for me for such a long time, a boat under sails, it's my favorite office. I also sail Class40s, but not at these speeds and not at this intensity. I was amazed by their level of concentration. They're tight-knit, all decisions are taken calmly! It was great. »