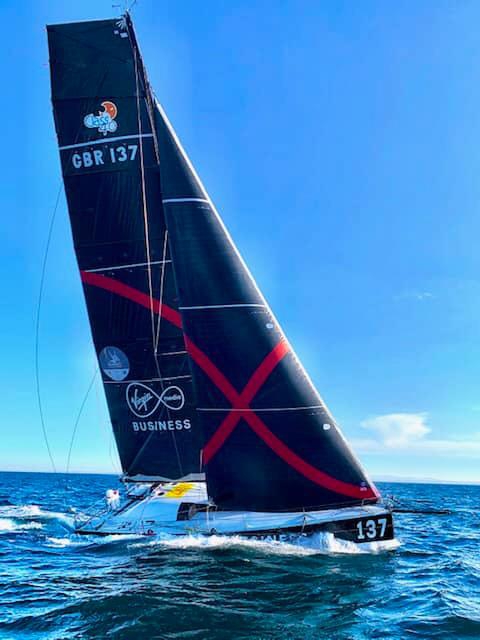 Only two Class40s participated in the Myth of Malham this weekend, as the majority of the fleet was on the CIC Normandy Channel Race.

The explanation of the team on their network at their arrival: " Fantastic for Charles Emmett & Nigel Colley to be out on the water this weekend in the RORC Myth of Malham Race after a 9 month dry spell. Mixed conditions saw a windward/leeward (reversed) to Eddystone and back.

Light SE breeze for the first 8-10 hours, on a dead run, not ideal for a C40 saw the IRC zero and class 1 boats get away from us, but as the wind built to 20+kn for the last part of the leg Manic got powered up and started to reel them in. By the rock we were lying about 12th on the water - the two top boats a good 20 miles in front.
With the wind now in the NE and still at 20kn, we powered towards Casquettes on a port fetch, slowly taking all but the lead 2 boats in class 1. Routing all said stay south at Portland for the right shift coming, but never mentioned a 4 hour shut down. We ended up in the wrong place for the right reasons and watched a gaggle of half a dozen creep past us through the inner channel and up the shore while we sat and waited for the shift that never came. A light beat for the last 35 miles gave us no chance to catch them again and we finally finished at just after 0230 this morning with an elapsed time of just over 36 hours, in 10th place from the 127 starters.
The only other Class40 racing had some issues at the start and ended up finishing 10 hours behind us - but a win is a win
A big thanks to our amazing stand in crew of Cat Hunt and Hugh Ward who were simply awesome and looked after us two old blokes extremely well"