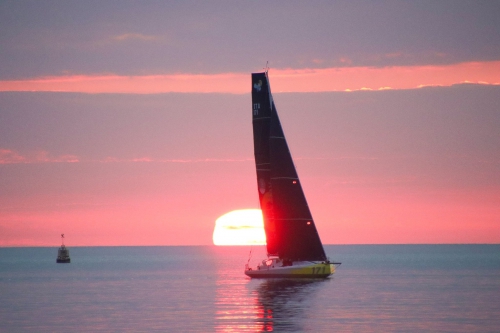 The SSE Renewables Round Ireland Yacht Race, organised by Wicklow Sailing Club, welcomed the Class40s for the second time.
The programme, as the name suggests, was a circumnavigation of Ireland leaving all the islands except Rockall to starboard; a theoretical course of 704nm, from the wild west coast to the busy North and St George's Canals.

The Class40 category had 4 boats on the start line on Saturday 18th June. Leading the fleet from the start, Kite #144 (G. Leonard) and InFluence #171 (A. Fornaro) led a great duel. In the end, the Italian boat won after 4 days 16 hours and 5 minutes of racing. The American boat crossed the finish line a little over an hour later.

The Finnish Fuji #38 completed the podium, followed by Peregrine #68.

Andrea Fornaro: "The race was quite hard because there was a lot of wind in the first part and a very rough sea but then there was very little wind. It was almost like being in the Mediterranean!  Ireland is beautiful and has wonderful colours, especially the western part.  Now it's time to rest.  Our next race, the round the British Isles in August, will be even more challenging."