This engine story ruined my Route du Rhum  Destination Guadeloupe. It tastes of diesel, not rum. 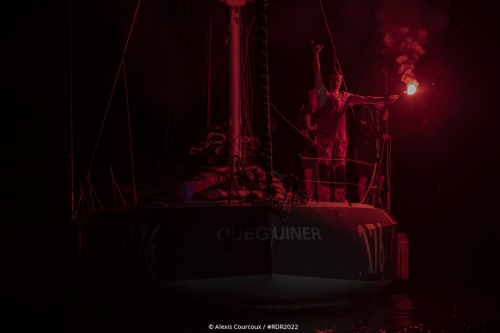 This Wednesday, November 23, at 2339hrs UTC Corentin Douguet on Queguiner-Innoveo crossed the finish line in Pointe-à-Pitre in third position for the twelfth edition of La Route du Rhum – Destination Guadeloupe. His race time is 14 days 9 hours 24 minutes 12 seconds. The skipper of Queguiner-Innoveo completed the 3,542 mile course between Saint-Malo and Pointe-à-Pitre at a speed of 10.25 knots on the great circle (direct route). He actually traveled 4,031.19 miles at an average speed of 11.67 knots. He arrived in Pointe-à-Pitre 6 hours 15 minutes 32 seconds after the Class40 winner, his training partner and fellow former Figaro ace Yoann Richomme (Paprec Arkéa).

Douguet’s race started so well. From the first night, less than five miles off the coast of Perros-Guirec, Corentin Douguet took control of the race. The skipper of Queguiner-Innoveo was among the very top seeds as winner of the 1000 miles of Sables in April, 2nd in the Normandy Channel Race (two up with Yoann Richomme) in May, and 2nd in the Dhream Cup in July.

In the Bay of Biscay he is nicely locked in with the peloton alongside Ian Lipinski (Crédit Mutuel), Luke Berry (Lamotte – Module Création) and Xavier Macaire (Groupe SNEF). But on Sunday November 13, it was Yoann Richomme (Paprec Arkéa) who took over the lead

The duo who trained so much together fight with each other until the Azores when Douguet’s engine starts to give him problems. "It is that energy problem that cost him so much energy" said Richomme today.

Douguet even thought of stopping off in the Azores. "I had to dismantle the whole engine and transfer the diesel into a small container, placed right next to where I sleep" explains Corentin. And this morning before the finish, he revealed that he had been penalized 45 minutes for having unsealed his engine. “This engine story ruined my Route du Rhum – Destination Guadeloupe. It tastes of diesel, not rum.”

He speaks towards the end of his race as "a game against Italy". After fighting against his Lombardini engine, he is also trying to control the fiery Ambrogio Beccaria (Allagrande-Pirelli), Italy’s winner of the 2019 Mini-Transat. Never more than 10 miles separate them in the trade winds. The Tour of Guadeloupe brings the gap down to just 2 miles and the race for the podium is epic as ever in the lee of Basse Terre, Butterfly Island. A renowned Figaro racer and past French elite solo champion Corentin Douguet crossed the line in 3rd place and his ability to not let go despite the circumstances is a victory in itself, however frustrating it may be.

Douguet on the dock
The feeling at the finish. “When I cut the line, I felt a little lonely… There was no crowd! I'm happy, it's still a podium on a Route du Rhum – Destination Guadeloupe and a very good result. I was aiming a little higher than third but I knew it would be complicated and it got complicated a little quickly but it's great to be here. It's the 'Rhum', it's the legend... And I understand better why it's the legend! »

Facing adversity. “Between my Lombardini engine and Ambrogio, we had to fight against Italians! It wasn't easy, but ocean racing never is. There, it was a bit frustrating not to be able to really play for the win. At one point, these technical issues took me out of the game a bit. I must have missed a few details in my preparation, which was not the case for Yoann (Richomme) and Ambrogio (Beccaria). That's an explanation but I'm not looking for an excuse. With or without this engine problem, there is nothing to say I could have beaten them. »

3rd place. “We hesitated for a long time about making a pitstop in the Azores. If that had been the case, 3rd place would have been difficult to acheive. To continue was the right decision even if there was a 45 minute penalty to be taken. And in the end ittook less time to make circles in the water at the tip of the Old Fort (at Guadeloupe) than to stop in the Azores. »

Richomme's victory. “I am super happy for Yoann. It was a great year, we exchanged a lot, collaborated a lot. I didn't think it would come to such extremes. For me, Yoann is the Djokovic of ocean racing: he has no one to fear. But obviously, he was a little afraid of me. There are quite a few guys from his team who have been on my boat so I wonder if my engine problem is not related to it (laughs). He didn't need that! »